Melbourne is downsizing its accommodation offering – with the introduction of Australia’s first micro hotel.

A planning proposal is before the city’s council which, if successful, will see a 140-room, 12-storey hotel replace the old Theosophical Society building on Russell Street in the CBD.

Rooms will be bijou budget-priced “pods” containing a bed and very little else – the kind of accommodation sweeping cities across the US, Europe and Asia in a minimalist accommodation movement.

JUCY Snooze has just opened a similar venture in the accommodation-poor tourism mecca of Queenstown, New Zealand, with the operator telling Accomnews: ““It’s so exciting working in the hostel market in New Zealand and helping shape the change and perception of hostels here.

“In Europe and North America, boutique and design-driven hostels are the norm for all types of travellers, including business travellers.

“It’s awesome to be involved with making that switch from traditional backpacker dorms to design and customer experience-focused hostels in New Zealand too.

“So far, our customers have loved what we’re doing. There’ll always be the odd exception, but for the most part they’ve loved the bright, playful interiors, the pod concept, and being good bang for your buck in the centre of town.”

Now Victorians are preparing to embrace the global tendency towards minimalisation.

“This is just another iteration of the consumer saying ‘we want something different for my needs and values’ and the tourism market has again responded to that.”.

Ms Mariani said traditional operators should not feel threatened by micro hotels entering the market as they would supplement rather than disrupt the industry.

Central Melbourne saw an influx of 13 million visitors in 2017, a figure that is expected to grow by some nine percent each year. 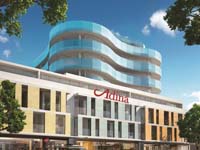