Hotels owned by the Sultan of Brunei’s investment company have gone dark on social media – including Brisbane’s Royal on the Park – as international condemnation grows over the monarchy’s brutal new laws.

The Brunei Investment Company owns the Brisbane Hotel and nine luxury hotels across the US and Europe, including the Beverly Hills Hotel, London’s The Dorchester and the Plaza Athenee in Paris.

Meanwhile the Queensland government has backed away from deal with Royal Brunei Airlines to run a new four-times-a-week service to Brisbane previously described by premier Annastacia Palaszczuk as a “win for Queensland”.

Thousands of Australians have signed a petition demanding the airline’s landing rights in Australia be rescinded and the state’s tourism minister Kate Jones said: “We suspended negotiations with Royal Brunei as soon as we learnt about changes to the law, allowing the persecution of Brunei’s LGBTIQ community.

“We will not provide any taxpayers’ dollars to Royal Brunei Airlines.”

Virgin Australia has also decided to end its staff leisure travel agreement with the Brunei’s national carrier over the laws.

Staff have been emailed: “Given the harsh (including death) penalties being introduced for activity that is legal and acceptable in Australia, the myID agreement between Virgin Australia and Royal Brunei has now been terminated effective immediately.” 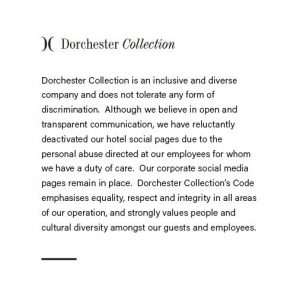 Online comments about the Royal on the Park have continued to urge a boycott of the Brisbane hotel, Doug Pollard commenting on Facebook: “Sultan of Brunei also owns “Royal on the Park” hotel, Brisbane. Queensland government and businesses please do not use this hotel” and Sheila Lorraine arguing: “Boycott these and The Royal On The Park Brisbane….owned by the disgustingly rich Sultan of Brunei – who now implements total sharia law and will now start stoning people.”

Travel companies are now dealing with cancellation requests for flights with Royal Brunei Airlines and pre-booked visits to the sultanate.

One woman who booked a flight with the airline accused Flight Centre of turning its back on passengers, even after the travel company waived cancellation fees on her refunded journey.

The traveller and her partner, who cancelled after learning about the new laws, were indignant at having to fund a $300 fee issued by Royal Brunei Airlines, saying the travel agency should cover the cost.

A spokesperson for Flight Centre told news.com the agency was unable to waive any fees payable to the Brunei airline.

The real opportunity in 'voice' is human engagement