Latest figures show The America’s Cup lifted Auckland daily hotel performance to its highest levels of early 2021, according to preliminary data from STR. 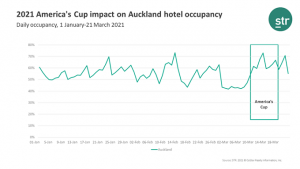 The rise in occupancy was also accompanied by an improvement in average daily rate (ADR) and revenue per available room (RevPAR). By 13 March, each metric improved to its highest levels since January 2021: ADR (NZD264.47) and RevPAR (NZD192.96).

Amid the latest pandemic lockdown in Auckland, the market’s daily occupancy levels were below 50 percent for the period of 28 February-8 March. That included a low of 41.8% on 2 March.

All in all, there was a material improvement for Auckland hotels during the time of the event,” said Matthew Burke, STR’s regional manager pacific.

“Large sporting events have long been key demand generators for the industry, and as the pandemic situation improves around the globe, so should the volume of events around the world. At the same time, there is still uncertainty and the potential for a return to cancellations if COVID metrics worsen.”