Built and Irongate Group in a joint venture lodged a Stage 1 State Significant Development Application (SSDA) for the redevelopment of a luxury hotel mixed-use project at 52 Phillip Street and the adjacent heritage-listed building at 50 Phillip Street. 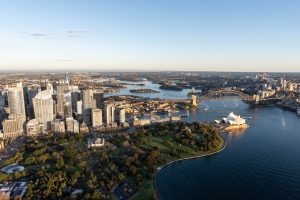 The proposal seeks to amalgamate the Built Irongate JV-owned 52 Phillip Street and the NSW Government-owned 50 Phillip Street to deliver a new 5/6-star hotel.

If successful the 50-52 Philip Street project, will offer circa 240 hotel rooms, podium food and beverage and retail offerings, a rooftop pool, spa and wellness centre as well as 16 high-end hotel branded residences.

The development will consist of three major components, the adaptive reuse of the NSW Government-owned 50 Phillip Street under a 99-year lease, a new podium infill building at the Built Irongate JV-owned 52 Phillip Street and a new tower at 52 Phillip Street which partially cantilevers over 50 Phillip Street to preserve the heritage structure. The proposal will not have an impact on the Chief Secretary’s Building on the corner of Phillip and Bridge Streets.

The new slender tower at 52 Phillip Street will taper away from the street maintaining the original streetscape. It will house suites for the hotel along with 16 branded residences with views never to be built out catering for a unique market which is already attracting strong demand. The residences will capitalise on the growing demand for high quality property in Sydney which has seen a resurgence with the COVID-19 pandemic limiting international travel. 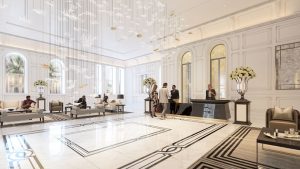 The Stage 1 SSDA is part of the three stage State Significant Development process which seeks permission for a building envelop and use. The USP proposal, in concept form, is deemed to be of sufficient interest to the NSW Government to warrant further development and is now at Stage 2 of the USP process. At the end of Stage 2, a determination will be made on whether or not the proposal will proceed to Stage 3. The NSW Government has not agreed to the proposal at this time.

Critical to the proposal is the careful heritage preservation and adaptive re-use of 50 Phillip Street, currently owned and occupied by the NSW Government. The proposed new hotel will restore the building to its original spatial character, the heritage interior joinery will be restored, and new work will interpret the features and detailing of the original finishes utilising Built’s unique skills in restoring and refurbishing heritage buildings. 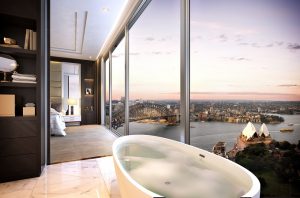 Also engaged on the project is Graham Brooks, an internationally recognised specialist in Cultural Heritage Management and Cultural Tourism policy, who has previously been commissioned by NSW Government to develop the Conservation Management Plan for the property.

Built CEO and Managing Director, Brett Mason, said: “This development represents a unique opportunity to give these buildings new life and make them accessible for locals and tourists, increasing public use and foot traffic. Our plans for a luxury hotel mixed-use development will do this while preserving the important history of 50 Phillip Street that reflect the unique nineteenth century architecture of the former NSW colony. This history will be restored, conserved and opened to the people of NSW in our development for the first time.”

Irongate CEO, Graeme Katz, concurred: “We are proud to be partnering with Built on this landmark development opportunity in the heart of the Sydney CBD. The development is one of the seed assets of our recently launched Templewater Australia Property Fund (TAP). TAP forms part of Irongate’s wholesale funds management platform and shows the breadth and depth of our property investment capabilities in Australia.”

Subject to approvals to proceed to Stage 3 and completing the USP process, the new hotel will draw both local and international visitors, boosting tourism in the precinct. CBRE Hotels has been appointed to conduct an international search to attract one of the world’s top luxury hotel operators and has already seen significant interest from luxury hotel groups who have waited years to find the right opportunity to launch a flagship property in the Australian market.

Built has a long and recognised proven track record in delivering and developing high-quality heritage projects including Sub Station No.164 at 185 Clarence Street, which revitalises two historic Sydney buildings into one of the city’s most distinctive A-grade office towers with a seven-level sculptural glass extension. The project was endorsed by Sydney Lord Mayor, Clover Moore, who said it is a great example of how heritage can be protected and incorporated within new developments.

Other projects include the refurbishment of the Australian War Memorial in Canberra, enhancement of the Hyde Park Anzac Memorial in NSW, the refurbishment of the State Library, Flinders Street Station and the Palais Theatre in Victoria, as well as the redevelopment of Perth’s Old Treasury Buildings into a vibrant hospitality and retail destination. Built is also currently delivering the redevelopment of the former Department of Education and Lands buildings on Bridge Street in Sydney and the significant refurbishment works at the Sydney InterContinental Hotel, including restoring the heritage façade.

Reminder: Kakadu is open for business in 2021