No matter how beautiful the location, guests want a good night’s sleep, a good barbecue and a nice hot shower in a clean bathroom at the end of the day.

Michelle Weston, the Chief Executive Officer of the Caravan Parks Association of Queensland, said her team had inaugurated a refurbishment award to recognise the work by Queensland’s holiday parks to improve their offerings.

“We wanted to showcase some of the refurbishments and to highlight the benefits that they can create for a property – not just with return on investment but also obviously enhancing the guest experience which benefits the whole industry,” Ms Weston said.

The Association’s 2021 Refurbishment Award was taken out by the BIG4 Whitsundays Tropical Eco Resort at Flametree on Airlie Beach.

Angie and Aaron Barton purchased the resort in 2016. The park, which is over 70 years old, had ten dated cabins and non-existent forward bookings.

The cabins were mainly occupied by last minute guests who were using the park as “a last resort” when other parks were full. The average length of stay was just 1.2 nights, even though the park was located at a glorious destination.

Although feedback on their customer service was positive, many reviews stated that the accommodation was outdated, needed refurbishment and was not value for money. The annual overall occupancy across all ten cabins averaged 8.1 percent.

As a result of Cyclone Debbie, COVID, and the tightening of lending by banks, careful decisions had to be made on how to improve the park on a tight budget. Aaron and Angie decided did most of the work themselves.

This included completely ripping out the interior of some of the cabins, putting in new kitchen units – purchased on sale from Bunnings – and buying flooring from a warehouse in Brisbane that was closing down. For other cabins it was more of a cosmetic upgrade, with cabins receiving a coat of paint, new blinds and new white bedding.

Angie and Aaron used their own photographs of Whitehaven Beach and had them printed onto canvas to complement the new interiors of the cabins.

So, what was the result?

Advance bookings for this year’s peak season are already up 68 percent, and in just over a year Angie and Aaron not only paid for the refurbishment but made a profit, with total booking revenue of close to half a million dollars.

Not only has this refurbishment helped their bottom line, but park reviews have improved with 21 perc of bookings now coming from word of mouth. Their GRI score has also increased from 7 in 2016 to 9.1 in 2020.

Angie and Aaron suggested other operators planning refurbishments look for government grant funding, and use tools such as those on the Queensland Government website to help with the process.

Peter Deveny, the Group Commercial Manager of A H Beard, said that in recent years holiday parks, and particularly Discovery Parks, had started to buy “really high end bedding – the sort of stuff that we would normally sell to 4 and 5 star hotels”.

“With the access guests now have to sites such as TripAdvisor,” Mr Deveny said, “regardless of what facilities a park might have, even if they have the best swimming pool in the country, ultimately if the beds are no good guests are going to get online and tell everyone.

“There has certainly been a trend over the last six or seven years for holiday parks to ensure that when they are refurbishing, beds are given top priority. Every guest wants a good night’s sleep.”

Paul Conradie, the Head of Sales, at D A Christie, which manufactures the original, iconic Australian public barbecue, said despite changing social trends, cooking with family and friends remained the glue that binds together shared holiday experiences.

“No matter what attractions and activities a park offers, the barbecue is where the whole family can gather around and enjoy each other’s company,” Mr Conradie said.

While there remained a strong demand in the leisure market for gas barbecues in park refurbishments, he was now seeing “a move towards electric barbecues, mainly because gas is now seen as not being as sustainable or as environmentally friendly as electricity.”

“Most of the demands remain the same, though,” he said. “People want a quality cooking experience.

He said “top of mind” should be safety and using barbecues with built-in safety features such as delayed starts so guests can’t just walk past and turn a button to switch on the heat.

The best barbecues for holiday parks also come with built-in sterilisation systems so that the hot plate sterilises itself by reaching a temperature which kills all the bacteria before flashing green to signify that is ready to be used again. 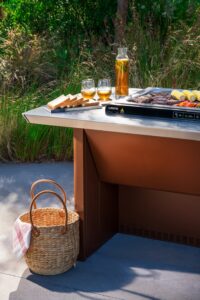 Mr Conradie also said barbecues should also be compliant with the Disability Discrimination Act so that they can be used by people even when seated.

“The barbecue is ultimately the most democratic activity you can have,” Mr Conradie said. “It’s grandparents, parents, kids coming together. People of all ages and cultures love to share meals.”