Data emanating from a national survey of 600 Australian Resident Accommodation Managers’ Association (ARAMA) members on the vaccination issue has clearly indicated that the majority of respondents, close on 90 percent, are already single or double dosed or intend to get their first jab within the next four weeks.

ARAMA CEO, Trevor Rawnsley, said the results confirmed what the organisation believed but were still surprising.

“I hoped it would be higher than that but even at 90 percent, that’s well beyond the vaccination intentions in society so I like to think our industry is a little bit ahead,” Mr Rawnsley said.

What came as the biggest surprise, he said, was the response to the survey question asking ‘Is it your intention never to get vaccinated’ with 10 percent of respondents advising that was the case.

He said: “When I see that 10 percent I just shake my head and my response to those people is if that’s their attitude they are in the wrong business.”

Other survey findings showed 57 percent of members polled thought it important their staff and associates were vaccinated as soon as possible.

And 56 percent stated it was important that their co-workers were fully vaccinated.

Only 29 percent would make it mandatory for their staff to be vaccinated. 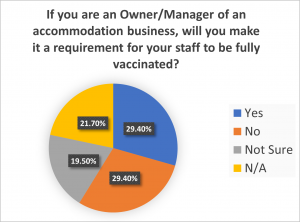 And only 8 percent would make full vaccination a requirement for all guests or tenants as opposed to 37 percent who said they would not.

“The caveat is that we need to learn to live with COVID-19. No one wants to see people get sick and die but once we reach the 80 percent mark, the chances of that are severely diminished,” Mr Rawnsley said.

“We have access to the vaccine and a good health system at our disposal. There is no reason why people can’t get vaccinated within the next four weeks.”

Polled last week, the core purpose of the in-house developed 10-question survey was to determine ARAMA members’ views on the vaccination issue before the organisation proceeded with a policy position reflective of and consistent with those views.

Commenting on Dr Jerry Schwartz’s decision to make vaccinations mandatory for staff at the Paradise Resort Gold Coast, Mr Rawnsley said Dr Schwartz was one of the best in the business and in a position to make that call.

“Our members are asking us for direction and we’re saying look, it’s a business-by-business case and you, Mr and Mrs Operator, have to make your own decisions based on your own business needs.”