Adelaide Oval could become the first Australian stadium to include a hotel under a controversial plan for commercial use of the Adelaide Parklands.

The $42 million development, to be fully integrated into the eastern side of the stadium, is proposed by the Stadium Management Authority (SMA) and would be funded by a loan underwritten by the South Australian government.

“It’s a great opportunity to put a new tourism product into the market that people will be able to come stay at the Adelaide Oval hotel and have breakfast overlooking the beautiful Adelaide Oval,” he said.

Mr Daniels said as a subtenant, it would have been hard to attract a loan from a bank without the government’s support.

Speaking about the proposal this week, South Australian premier Steve Marshall told the ABC his government was “very supportive of it, subject to planning approval”.

But critics are far from bowled over, labelling it an infringement on public land and describing the government loan as “unfair” and anti-competitive.

Adelaide Park Lands Preservation Association secretary Damien Mugavin said: “Giving money so that a commercial operation can take over public parklands, it is just so outrageous it doesn’t bear thinking about.

“I warn the premier that he is taking on a fight that will do enormous damage to his government’s reputation.”

“Adelaide Oval is without doubt one of the jewels in our crown and the concept of a boutique hotel attached literally as part of the stadium is very, very smart as the stadium already has an extraordinary advantage in terms of its facilities and its location,” he told InDaily.

“But, there are people who are investing in hotels now who didn’t know that was going to be part of the equation, who didn’t know they would be competing against another 180-odd rooms when they made their approaches and arranged their finances.

“This is a government using taxpayers’ funds to build a facility that will be a direct competitor with the other bricks and mortar venues in the CBD in particular.”

Horne said the AHA had received several phone calls asking if the government’s decision to loan the Stadium Management Authority the money would set a precedent for private hotel investors to also seek government financial assistance.

“This just muddies the water because it was not expected that the state government would become the financier of it, and that’s what left the level of angst and concern about where are we going in the future,” he said.

“Importantly, it will also impact on the future investors as to what level of accommodation they may or may not choose to go into.

“By having the Government come in and putting funding aside for this project, it will impact whether hotel companies in the future decide to put money into refurbishments or building their own hotel here in Adelaide when there is that unfair advantage.”

Adelaide Lord Mayor Sandy Verschoor said she had concerns about the future of the public land. The hotel would be the third built on the Adelaide Parklands following the 1988-opened Intercontinental and the under-construction Adelaide Casino hotel.

Premier Marshall argued the development would help generate income to ensure the stadium remained accessible to the public.

“We want this to remain the very best stadium in Australia, it’s as simple as that,” he said.

“So future augmentation can either be paid for by increased costs at the gate, further taxpayer subsidies or enhanced offerings from the SMA.”

If approved by the State Commission Assessment Panel, work on the new hotel would start mid-2019, with an anticipated opening in mid-2020. Marriott wants momentum in 2018, hints at brand growth in Australia 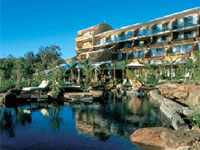 Kooralbyn on the market again