The award-winning Mount Lofty House, part of AccorHotels’ MGallery by Sofitel brand, had revealed the completion of its latest guest room refurbishments and commenced the final stage of its $14 million upgrade.

This classic Adelaide icon was built in 1852 by prominent statesman (the Jay Gatsby-like-figure) Arthur Hardy as his summer house. The glamourous manor soon became the state’s premier address for lavish and infamous parties for Adelaide’s elite.

The property passed through the ownership of several South Australian families before being disastrously burnt to the ground in the fires of Ash Wednesday in 1983. Architect Ross Sands subsequently spent three years restoring the house to its former glory using historic photographs and plans, and the property was reborn as a luxury boutique hotel.

From this gateway among the gardens, visitors can tour some of the best wine regions in the state and taste the seasonal flavours of SA. 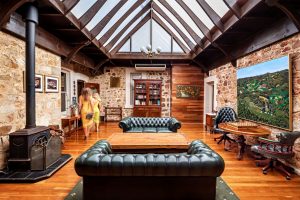 In the last decade this heritage hotel has grown and evolved, with conference room extensions and the construction of Stables Day Spa and Hardy’s Verandah Restaurant.

In December 2018 the refurbishment of all guest rooms was complete and now presents a perfect reflection of its luxurious designer boutique hotel status. Furthermore, the development of the new six-star, ultra-luxury Sequoia Retreat began and is scheduled to be completed mid-2019.

The ‘Sequoia’ development sits separate from Mount Lofty House and includes 15 luxury villas positioned on the front escarpment of Mount Lofty Estate, capturing views of the Piccadilly Valley. Each of the spacious villas have private balconies, fireplaces and views from every angle.

The general manager of Mount Lofty House, Jesse Kornoff, told us: “Construction has now started on Sequoia and we are all incredibly excited by the development as it will add an entirely new level of guest experience on the estate, which has been synonymous with decadence and celebration in Adelaide for 170 years.

“The Sequoia development will rival some of the best boutique hotels in Australia and, together with the refurbishment of the rooms at Mount Lofty House, we are confident that Mount Lofty Estate is going to become a destination in its own right.”

Accomnews asked Jesse to tell us the inspiration behind the guest room renovations. 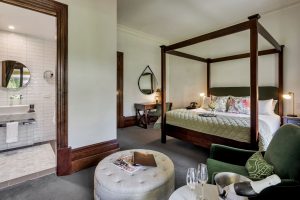 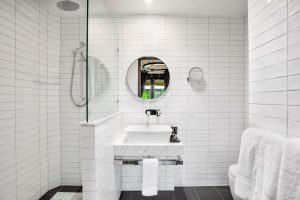 He said: “The aim was to carry through the design elements, look and feel of Hardy’s Verandah Restaurant redevelopment completed last year.

We wanted the rooms to feel modern but have a strong heritage theme, to be at home in such an iconic manor.”

The lavishly-finished rooms have been very well received by guests and the refurbishment has totally transformed the spaces, repositioning the hotel as one of the finest luxury boutique hotels in SA.

Tell us about the Sequoia development?

“The aim was to utilise common materials (spotted gum timber, basket range stone) to tie the new development into the estate; however, to design something totally new, with every area of the rooms focussed on the view over Piccadilly Valley.

“Floor-to-ceiling glass, a split skillion roof with window, split level dropping down into the living and balcony areas, high ceilings and open space between the bedroom and living area all contribute to the success of the project.

Although not finished, this project has already received a massive amount of interest and we are very excited to be able to offer a totally unique experience for our guests in 2019.”

Rise of the machines: Will hotels ever rely on a robotic workforce?

Tapping into the bottled water revolution